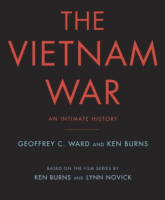 General Note
Jacket lists authors as: Geoffrey C. Ward and Ken Burns.
Bibliography
Includes bibliographical references and index.
Description
"A comprehensive look at the Vietnam War"--,Provided by publisher.
Description
More than forty years after it ended, the Vietnam War continues to haunt our country. We still argue over why we were there, whether we could have won, and who was right and wrong in their response to the conflict. This volume draws on hundreds of interviews in America and Vietnam to give us the perspectives of people involved at all levels of the war: U.S. and Vietnamese soldiers and their families, high-level officials in America and Vietnam, antiwar protestors, POWs, and many more, seeking to understand why the war happened the way it did, and to clarify its complicated legacy.
Description
What we remember, what we've forgotten, and what we never knew about America's least understood war, revealed in a riveting, richly illustrated volume based on the major ten-part PBS documentary series directed by Ken Burns and Lynn Novick. Historian Geoffrey C. Ward and filmmaker Ken Burns, the authors of the acclaimed and best-selling The Civil War, Jazz, The War, and Baseball, present an intimate history of the Vietnam War. All the major milestones are here--from the Gulf of Tonkin and the Tet Offensive to Hamburger Hill and the fall of Saigon--and we are able to listen in as three American presidents and their advisors search for a way to win or to get out. But most of the voices that echo from these pages belong to less exalted men and women--nearly 100 of them, those who fought in the war as well as those who fought against it, victims and victors, and Vietnamese from both North and South willing for the first time to share their memories of the war as it really was. More than forty years have passed since the end of the Vietnam War, but its ghosts remain. We still ask the questions today we asked then: Why were we there? What should we have done differently, or should we have done anything at all? Who was right and who was wrong? Answers remain elusive. But over the intervening decades, archives have opened, ideology has softened, men and women whose memories were once too painful to revisit have become eager to talk. The result is a compelling, completely fresh account of the long and brutal conflict that reunited Vietnam while dividing the United States as nothing else had since the Civil War. This unique tour de force filled with rare photographs, illuminating guest essays, and unforgettable firsthand accounts will reshape your understanding of the Vietnam War, and of war itself.--Jacket flap.