All branches will be closed on January 17 for Martin Luther King Jr. Day

The Sheriffs of Savage Wells
(eAudiobook) 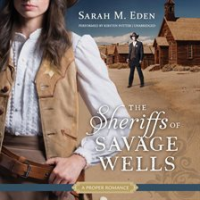